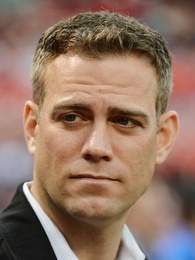 B I O
Theo Nathaniel Epstein (born December 29, 1973) is the President of Baseball Operations for the Chicago Cubs.

On November 25, 2002, he became the youngest GM in the history of Major League Baseball when the Boston Red Sox hired him at the age of 28. In 2004, he was general manager of the club that won the first World Series championship by the Red Sox in 86 years and was in the position when the team won another championship in the 2007 season. Epstein resigned in October 2005, but was rehired as GM and Executive Vice President on January 24, 2006. On October 21, 2011 he resigned from his job in Boston to become President of Baseball Operations for the Chicago Cubs.

Epstein's grandfather, Philip G. Epstein, and great-uncle, Julius J. Epstein – with Howard E. Koch – won Academy Awards for the screenplay of Casablanca, while his father, novelist Leslie Epstein, heads the Creative Writing Program at Boston University. Epstein's sister, Anya, was a screenwriter (Homicide: Life on the Street and Tell Me You Love Me).

On January 12, 2007, Epstein, who is Jewish, married Marie Whitney, a Roman Catholic[6] and founder and creative director of Two Penny Blue. The couple have two boys, Jack and Andrew.

Epstein attended Yale University where he lived at Jonathan Edwards College. He served as sports editor of the Yale Daily News, where Mitch Raab was his boss. He graduated in 1995 with a degree in American Studies. Eventually he took a job in the public relations department of the San Diego Padres where he worked closely with Larry Lucchino; soon Epstein became the team's Director of Baseball Operations. While working for the Padres, he studied full-time at the University of San Diego School of Law, where he earned a Juris Doctor degree.

On October 12, 2011, Epstein agreed to a five-year contract worth $18.5 million with the Chicago Cubs. On October 19, 2011 it was reported that Epstein's official title with the Cubs would be President and that San Diego Padres General Manager Jed Hoyer would take the GM position with the Cubs.

On October 23, 2011 he took out a full page ad in The Boston Globe, thanking Red Sox fans and the team's owners for their support. Two days later, the Cubs officially introduced Epstein as President of Baseball Operations. Although the Cubs finished in last place in the National League Central for the first three years of Epstein's presidency, they advanced to the National League Championship Series in 2015, marking their first postseason appearance since 2008.