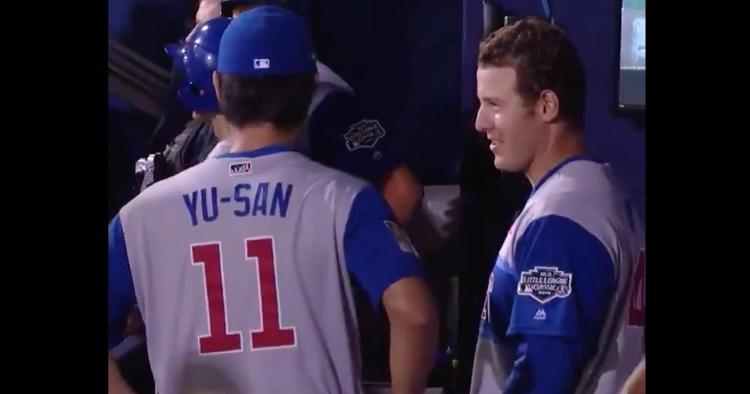 WILLIAMSPORT, Pa. — A heartwarming moment involving a couple of Chicago Cubs players took place at the Little League Classic on Sunday. Cubs first baseman Anthony Rizzo jacked a 2-run home run that caromed off the scoreboard at BB&T Ballpark at Historic Bowman Field and back into the field of play. The souvenir found its way to the Cubs' dugout, and Rizzo decided to give it to young fan.

Evidently, Rizzo was impressed by the star shortstop for the Japanese team in the Little League World Series, so he decided to find him in the stands and gift him the home-run ball. Therefore, Rizzo asked Cubs starting pitcher Yu Darvish, who is Japanese, if he would serve as his translator for the exchange, and Darvish happily agreed to do so, making for a great moment on the special evening.

.@ARizzo44 giving his home run ball to the shortstop from the Japan @LittleLeague team is so awesome. ?? #LittleLeagueClassic pic.twitter.com/wPdqC2RAvx